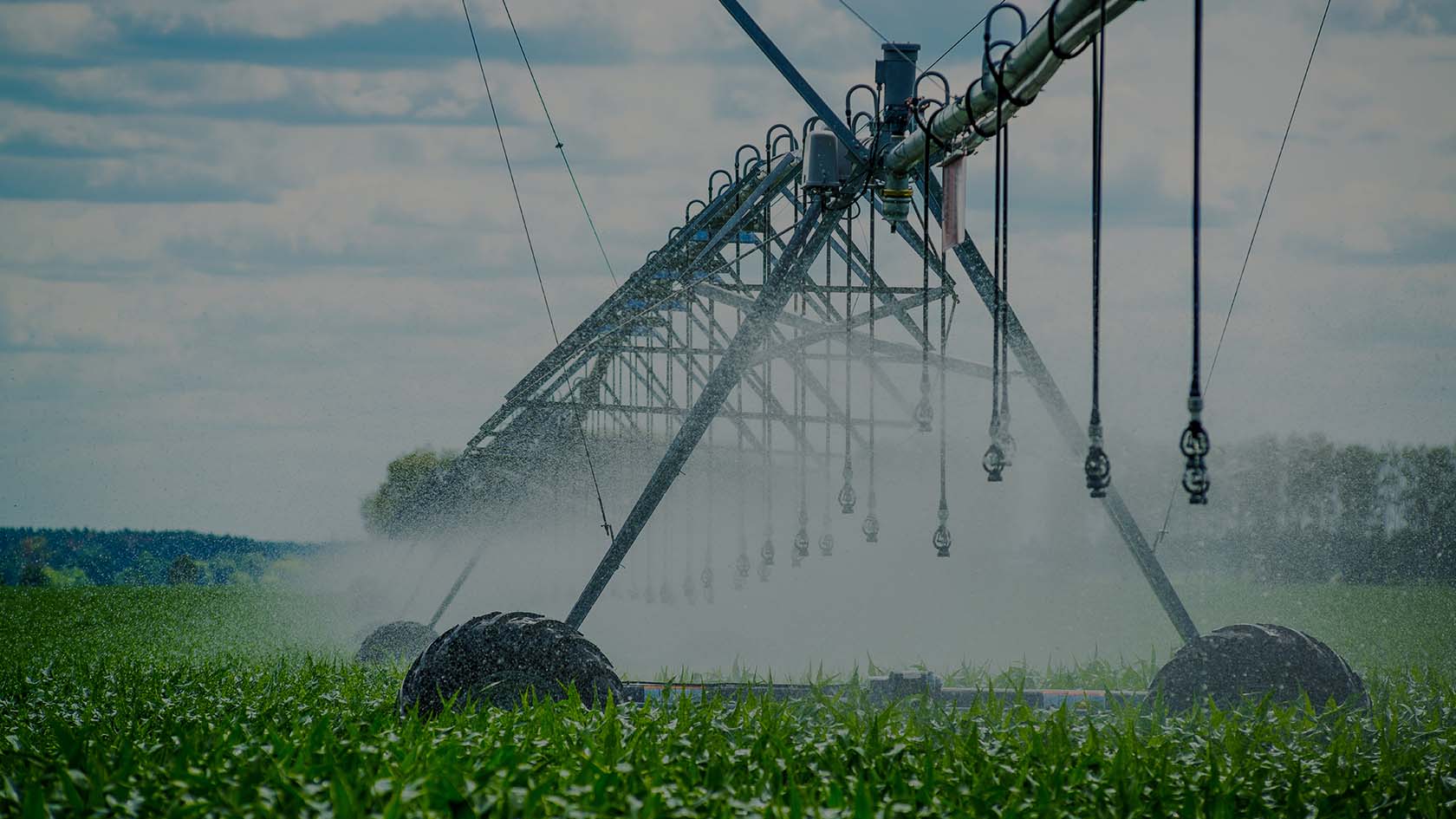 Types Of Irrigation Systems Learn More About Modern Irrigation Systems
TYPES OF IRRIGATION SYSTEMS
Regardless of the kind of field you have, one of the main steps you need to carry out is to decide the most suitable irrigation system. It will mainly depend on your budget, the soil texture, the weather and the type of crop. Do not depend on the rainfall and increase the productivity of your plants by choosing the best system for your field. Types of Irrigation Systems First of all, rain-fed farming and irrigation are the two main ways to cultivate crops. What is the main difference between them? The water that reaches the soil in rain-fed farming is direct through rainfall, however irrigation crops are watered by artificial systems that the farmer needs to implement. The system applied should be chosen according to the minimal soil erosion and water loss. It is necessary to take into account the equipment available and budget, the type of soil, the plant species and the land formation.

In the bibliography, you can find a wide number of systems classified according to their characteristics. In total, we summarized nine of them: surface, sprinkler, drip, subsurface, localized, sub-irrigation, terraced, flood, perennial and manual irrigation. However, the first three described are the more commonly used. 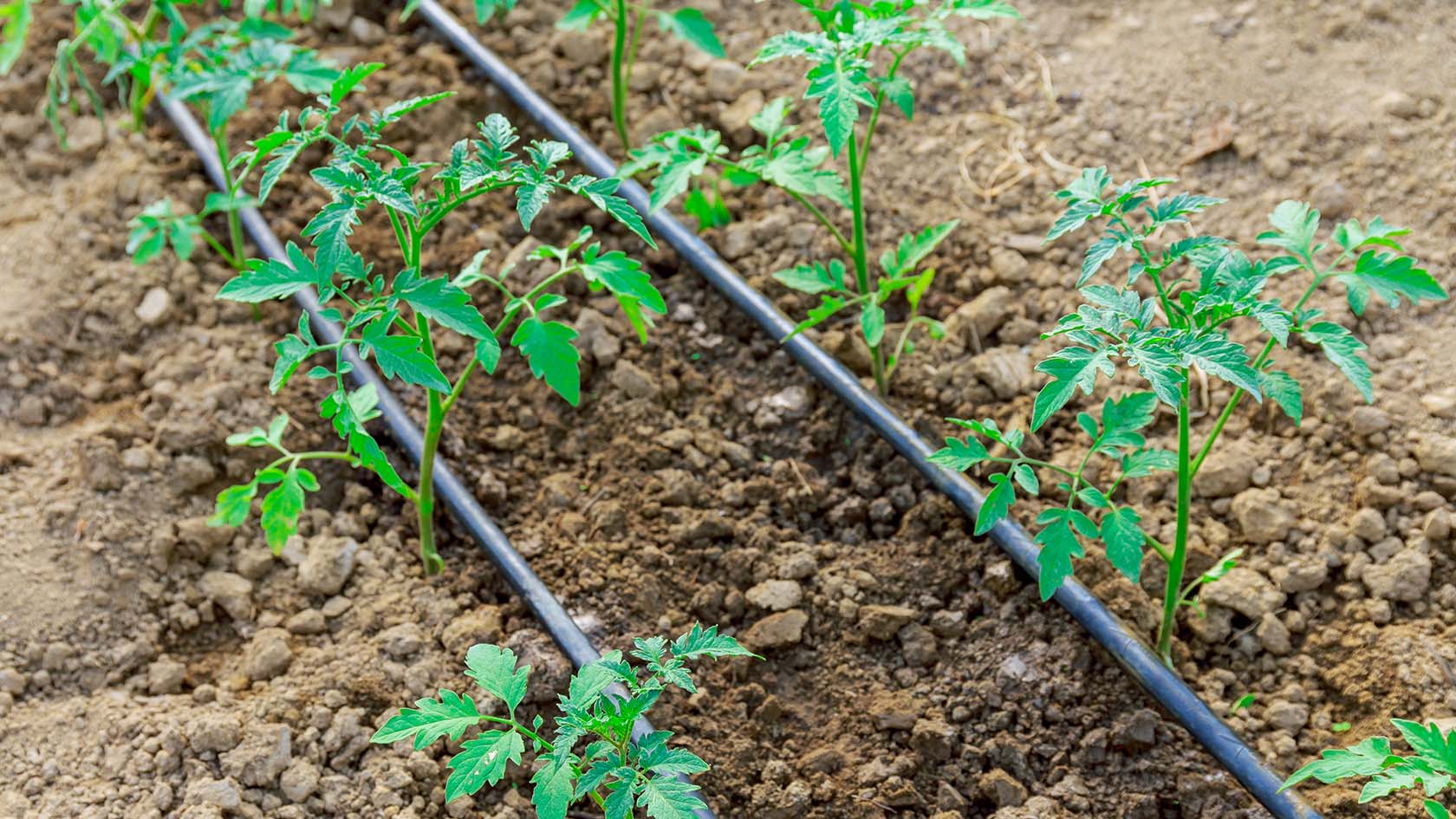 Surface irrigation This system is the most ancient and widely used all around the world. It presents the big advantage of not requiring a mechanical pump because the water is distributed by gravity instead. Even if 85% of irrigation in the world is using this irrigation system, it is considered least efficient among all methods due to the high water loss. It will depend directly on the soil texture, that is why it is not recommended for high sandy soils with high infiltration. According to the type of channels performed for the water to flow, we can define three types of surface irrigation:

- Furrow irrigation: Based on furrows, which are parallel channels arranged in the field to let the water flow. They can have from 10 to 50 cm deep and the distance to each other depends on the crop, oscillating between 40 to 75 cm. This method is cheap compared with others and requires low installation costs.

- Border irrigation: This system is older than the one with furrows and is specially designed for fields with slopes. In this case, the field is divided into blocks with borders defined forming rectangular strips for the water to flow.

- Basin irrigation: It is particularly used in small fields and tree cultures. Basins are prepared in proportion to the size of each tree and get connected by supply channels. This way, the water can easily flow from one basin to the next. 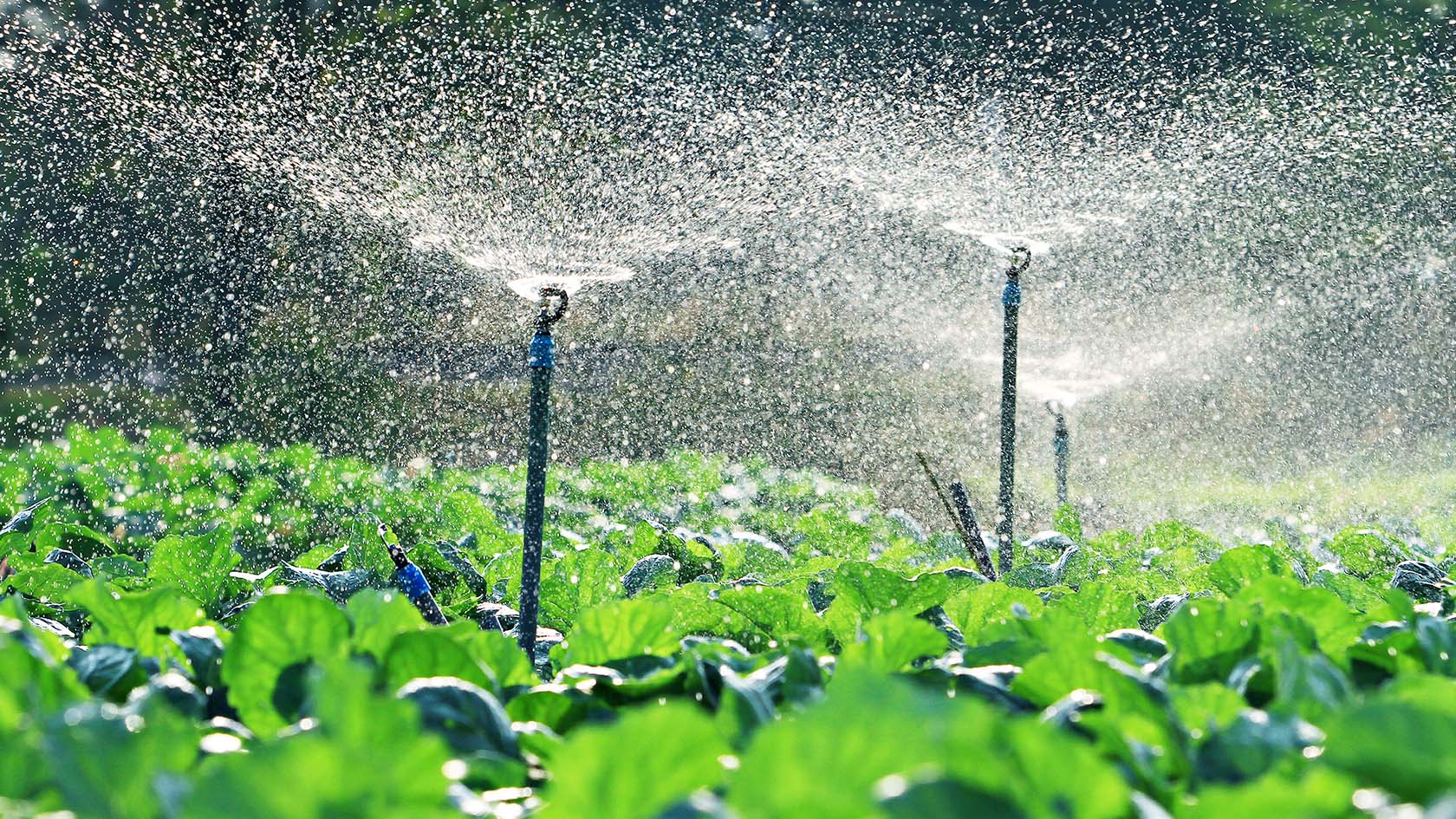 Sprinkler irrigation In fields that implement this system, the water is not supplied directly to the roots but by overhead high-pressure sprinklers or guns. Those can be fixed or being disposed of on moving platforms. The water reaches the plants in form of fine spray very effective, especially for tree crops. This system is very easy to be maintained even in large open spaces and is independent of gravity and the slope of the land. The sprinklers simulates the natural rainfall, supplying water uniformly. In Libya and Saudi Arabia, this irrigation method is the most predominant, used in more than 65 % of the fields in both countries.

The main issue is that weeds get also a good amount of water, which makes them strongly competitive with the crop. To solve this, herbicides can be included in the water as well as pesticides and other products to avoid crop spoilage. In general, this system is improved over time, and today for example there are improvements such as rotating nozzles that spin or rotate while watering an area. They are very effective and the farmers can also precisely control the millimetres of water released per hour.

There are two special types of sprinkler irrigation, according to the sprinkler disposition and the area of action in the field: 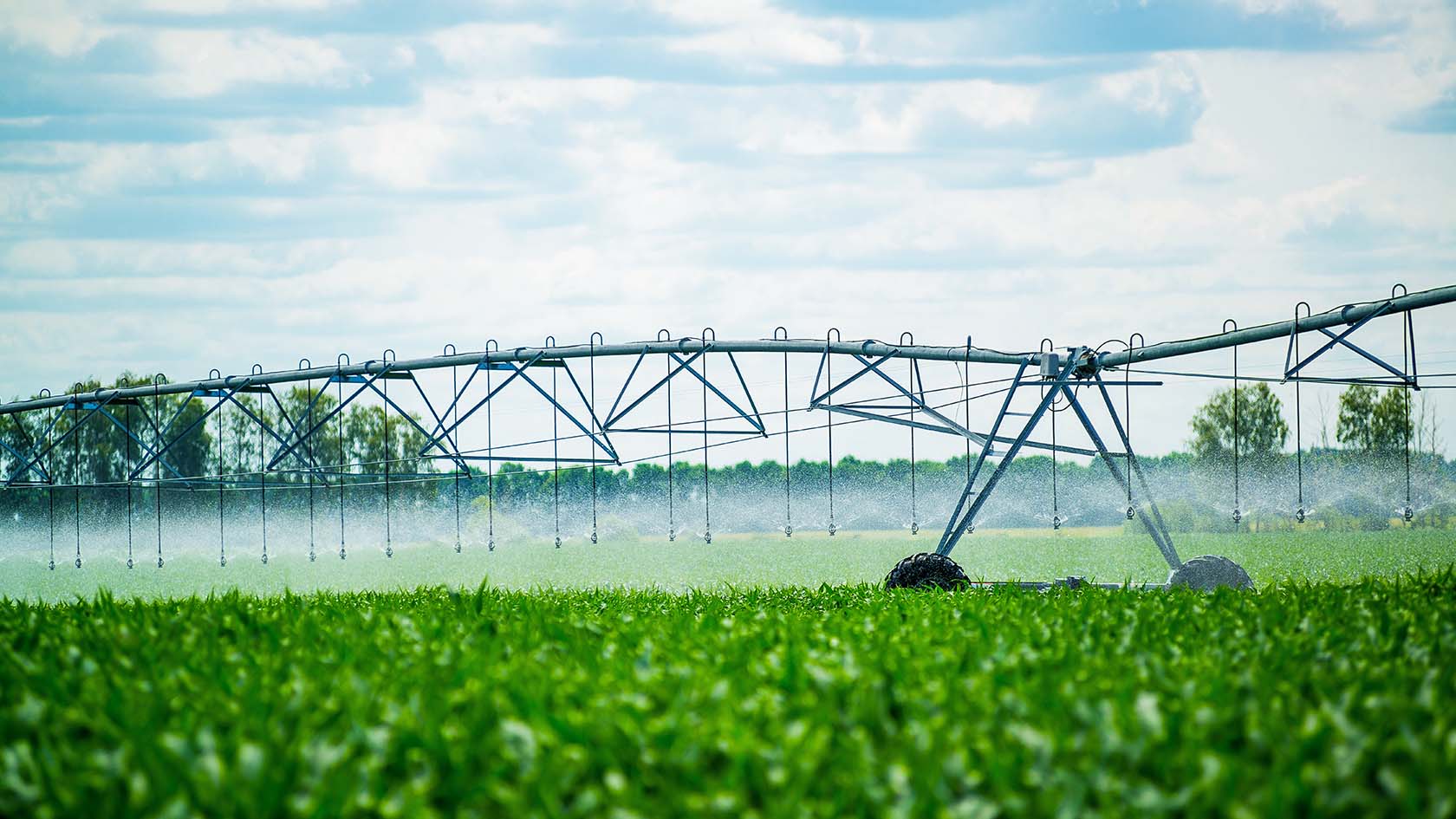 - Center pivot irrigation: The sprinklers are mobile and disposed of in a wheeled tower that creates circular patterns. It allows performing an even water distribution. Is one of the main systems used in the flat areas of the United States.

- Lateral move irrigation: In this case, a set of sprinklers are moved across the field back and forward creating a uniform water release. The water flows through pipes that form a linear structure. Drip irrigation Drip irrigation is a combination of the two systems previously defined but uses 30 to 70 % less water than surface or sprinkler irrigation and also saves cost labour. This mechanism is about the release of drops of water but, instead of overhead, near to the root of plants. That is why it presents combined benefits, for example, minimizing water evaporation and nutrient runoff, preventing soil erosion and do not promote weed formation. On the other hand, setting up this system is very expensive and it requires skilled personnel to properly control the water flow and dripper locations. 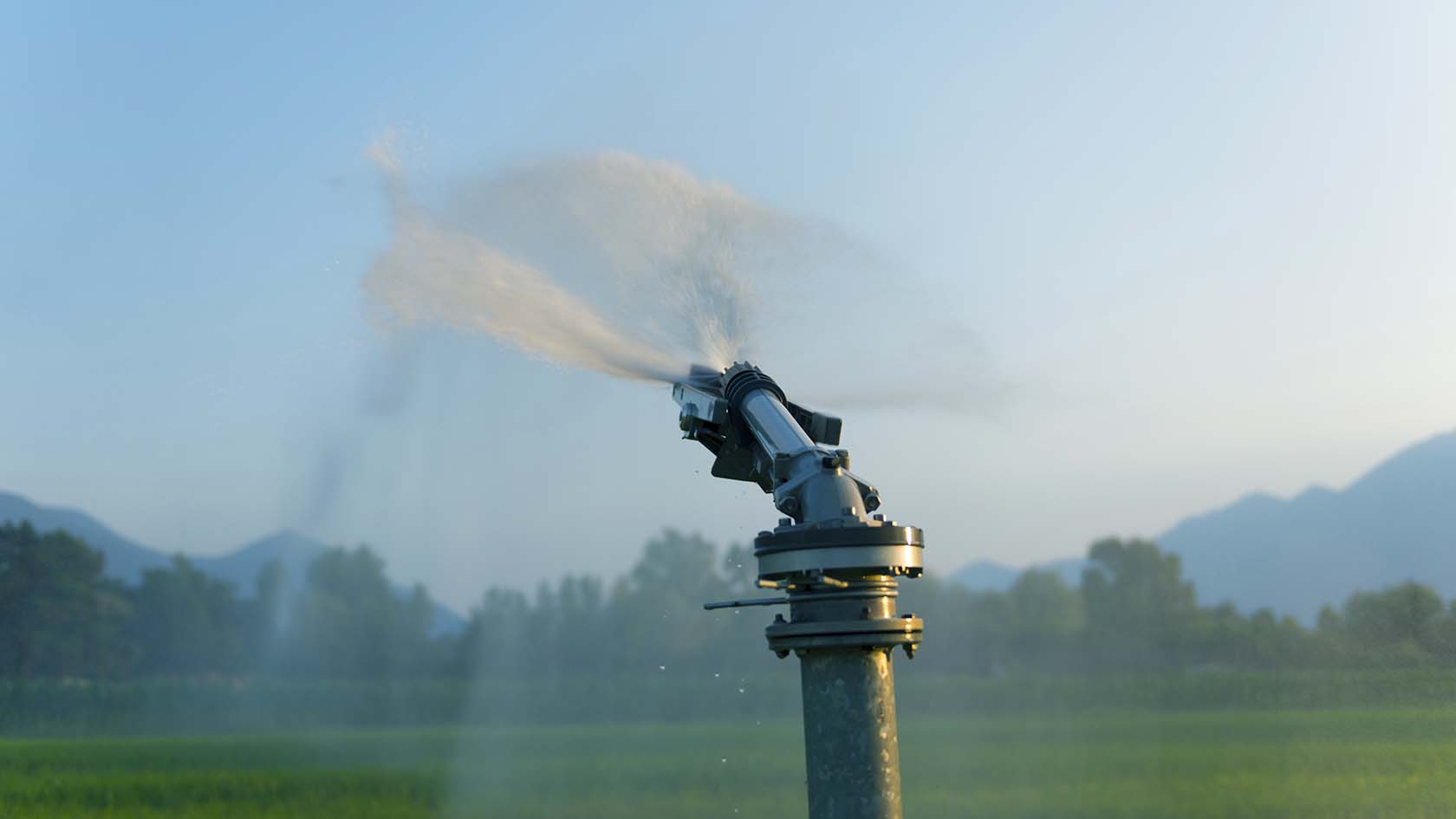 Other irrigation systems - Subsurface irrigation: This system is similar to drip irrigation, but in this case, the tubes are hidden beneath the surface. It is more recommended for sandy soil areas and places with very warm weather since the tubes get well protected. The loss of water is drastically reduced because the airborne drift disappeared. The top surface of the soil is always dry which minimize the presence of diseases and weeds.

- Localized irrigation: Also similar to drop irrigation but releasing a higher water volume per plant. It delivers water just around the base of each plant, either below or above the soil surface by nozzles or small pipes.

- Sub-irrigation: This type of irrigation is very effective in areas with high water tables. It consists of a system of pumping stations, canals, gates and ditches that distribute the water across the land by raising the water table.

- Terraced irrigation: It is an ancient practice performed in mountainous regions. As the land is sloping, staggered cuts are made in which it can be cultivated. In this way, both water and soil nutrients are retained, avoiding current and generating high productivity.

- Flood irrigation: As the name suggests, the fields are completely flooded with water in an intentional and controlled way. That is why it can also be called inundation irrigation. This procedure completely saturates the soil but is beneficial for certain crops such as rice and corn.

- Perennial irrigation: Instead of controlled water flow, in this case, the water supply is continuous, provided from a river, reservoir or weir. This characteristic makes perennial irrigation one of the cheapest systems, even though is not commonly used.

- Manual irrigation: Nowadays, manual irrigation is only carried out in developing countries. It consists of distributing water through manual labour and watering cans. This is a very ancient and labour intensive system that always tend to be substituted by one of the previously described.

All your doubts can be solved

Regardless of the kind of field you have, one of the main steps you need to carry out is to decide the most suitable irrigation system. It will mainly depend on your budget, the soil texture, the weather, and the type of crop. Do not depend on the rainfall and increase the productivity of your plants by choosing the best system for your field, and do not hesitate to share your questions with the i-Plant Nutrition community. Our experts can help you to obtain the most effective system.
Latest articles How to grow melon Types of irrigation systems Genetic improvement of tomato plants The importance of fallow periods for soybeans How to grow oranges How to grow plums How to grow lemons How to grow strawberries How to grow raspberries Climate change impacts on global agriculture Citrus pests, diseases and disorders berries pests, diseases and disorders Plums pests and diseases Leaf vegetable pests and diseases Dealing with gray mold What to consider when writing an agricultural prescription